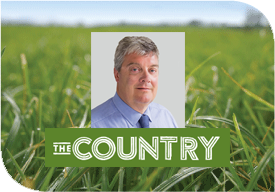 Peter Newbold, General Manager of PGG Wrightson Real Estate, and Jamie Mackay from The Country recently got together to discuss the rural property market.

Mackay pointed out that if you had a sheep or beef property, it was certainly being punted along by the forestry guys.

Newbold agreed and said that forestry had a big influence value-wise, as well as in sales volumes.

He said one or two traditional farmers wanting to buy had been cut out of the market because of forestry.

But he emphasised there was still a strong demand for sheep and beef properties.

Additionally, buyers not normally involved in rural before, like large corporate entities and well-off individuals from cities who wanted to get into rural, had influenced prices as well.

A lot of buyers were looking for properties and this bodes well moving forward, Newbold said.

Moving to the milk price, Mackay mentioned Fonterra had lifted its forecast milk price and ASB Bank had predicted a record $10/kg milk price forecast for the 2022/23 season.

He asked if there was a lot of interest in dairy farms as a result.

Newbold said PGG was busy doing a lot of appraisals and meeting with farmers keen to bring listings to the market in spring.

Newbold reckoned there would be a lot of activity early - and a lot of it would be dairy.

Meanwhile, many decisions were being made around succession and retirement plans and these would all come into play.

More dairy farms would come to the market and there'll be more sales, Newbold said.

He noted that more traditional rural areas - like Otago and the King Country - normally came in later when the market lifted and stayed longer.

Newbold said this season there would likely be more activity in Southland, Otago, King Country and Canterbury.

Mackay turned the conversation to kiwifruit, remarking that there was still hot demand for properties.

Newbold said a lot of kiwi fruit properties were coming to market and there was a lot of development in the wider Bay Of Plenty, not just in kiwifruit but horticulture in general.

Finally, Mackay asked whether interest rates would take the sting out of the rural property market.

Newbold reckoned it wouldn't be to the same extent as there were strong fundamentals in the rural market at the moment.

Returns were good, New Zealand product was in demand overseas, and farmers had reduced a lot of debt and were in a strong financial position, he said.