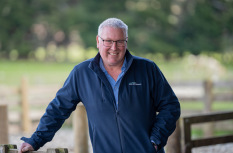 Derek Ayson has been involved in the rural services industry since 2011.

Initially, Derek worked for Farmlands Co-operative in client servicing roles, and has been a real estate salesperson since 2015.

Prior to his involvement in the agri-business sector, Derek farmed the family’s 482ha Slopedown property. Derek now lives on a lifestyle property on the outskirts of Gore with his wife, Rachel, and their two teenage daughters, Georgia and Chonelle.  Derek is well known in the Eastern Southland/South Otago district having had past involvement with the Clinton Young Farmers Club, Small Bore Rifle shooting (a South Otago representative for 20 consecutive years), the Eastern Southland Car Club and the Southern Aussie Muscle Car Club.

Motorsport is probably where Derek has gained the most notoriety in recent years, having won two national rally titles in both two wheel drive and four wheel drive classes.  Having competed in the Border Ranges Rally in Australia, his biggest accomplishment to date has been the overall winner of the NZ Silver Fern Marathon Rally in 2016, the event being held over seven days with competitors from all over the world.

Derek is passionate about delivering excellent customer service.  His honesty, integrity and local farming knowledge are strong attributes which will assist you with any of your rural or lifestyle real estate enquiries.

“When looking to buy, I viewed several farmlets with Derek and found him to be friendly, cheerful and prompt for appointments. He did his best to answer questions, and I considered him to be genuine in the information he relayed. While Derek made various suggestions, at no time did I feel pressed to pursue any of the properties he had shown me or suggested to me. Nothing was a problem for Derek and I enjoyed my time looking for the right farmlet with ...
Read more