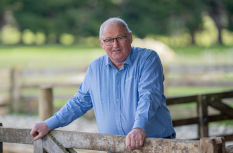 Robin has been involved in New Zealand’s farming industry since 1980.

The first two years were spent working on a dairy farm in Maramarua, South Auckland then twelve years sharemilking in the Northern Waikato and Hauraki Plains before Robin and his wife Lois purchased their first farm in Tuturau, Eastern Southland.

In addition to operating the dairy farm Robin established a farm consultancy business and then with the help of Lois they built a hydroponic lettuce and strawberry growing business which was sold fourteen years later. The next challenge was building their own on-farm milk processing factory which processed and bottled organic milk from their farm and also produced a range of organic cheese and lactose free yoghurt which was marketed throughout New Zealand and Australia.

Having divested themselves of this business in 2017, the dairy farm is now managed by their son enabling Robin to focus on his next challenge. With his farming knowledge and his on-going community involvement, Robin’s desire to achieve results will assist both vendors and purchasers with their real estate needs.

I have purchased rural property where Robin Greer has acted as the real estate agent. I found Robin completely honest and up front. He was helpful and his moderate attitude and rural background and understanding of farming practices and management were a great advantage. Prior to this purchase Robin also showed me other properties and assisted with another purchase I was associated with. I confidently recommend Robin to anyone considering rural property in the ...
Read more