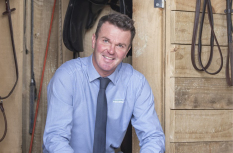 Scott is no stranger to the world of lifestyle and rural properties, as he grew up on a dairy farm in Scotland.

Horses have been a huge part of his life and he is himself a talented horseman with a deep understanding of the requirements for a good equestrian property.

He topped his year at Dundee University in Scotland, completing a BSc (Hons) in Financial Economics and Statistics. Seven years of retail management with ASDA in the UK gave Scott a wealth of experience dealing with staff, customers and suppliers.

Scott has represented both Scotland and Great Britain in the Prince Phillip Cup Equestrian Mounted Games. After moving to New Zealand in 2004, he coached New Zealand to win the World Championships in Mounted Games twice.

He also re-trained and re-homed over 100 racehorses, holds a NZTB trainers licence and has show jumped to Grand Prix level.

Having worked in the equestrian world for so long, Scott has a solid database of clients throughout New Zealand and Australia.

"Scott Borland and Martin Lee made an exceptional team to sell my lovely home. Throughout the entire process they were truthful, responsive, accommodating and fun. With their solid experience and the strength of their relationships within the local community, they were able to negotiate some complex challenges and constantly adjusted to the varying demands of the sale which delivered a great outcome.”