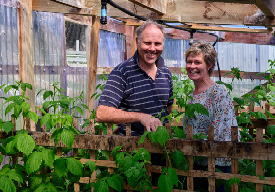 A 10 hectare lifestyle property with some of Dunedin’s finest views and a five generation heritage sold in October before the marketing campaign planned for it had even begun.

Craig Bates of PGG Wrightson Real Estate, Dunedin sold Bellfield, Highcliff, eight kilometres east of the Dunedin CBD in late October. Offered for sale on behalf of Richard and Wendy Farquhar, whose family first took it on in 1867, the property sold to a young professional Dunedin couple.

“In the current market for lifestyle property, we expected strong interest in such an attractive listing. That proved correct, with motivated buyers responding decisively to communication to our database, before the more general marketing campaign started.

“As more and more New Zealanders regard lifestyle property as a dependable, worthwhile investment, demand is running hot throughout most of the country. Otago is no exception. This property sold for between 30 and 35 per cent above realistic valuations of 12 months ago,” said Craig.

Richard Farquhar’s great-great-great grandparents, along with their five children, moved from near Aberdeen in Scotland to Australia in 1860, then in 1865 crossed the Tasman, purchasing land on the Otago Peninsula. After clearing the property the family used it as a dairy farm, loading their milk cans on a horse and cart to sell door to door to the Anderton’s Bay community for several generations, before shifting to sheep and beef in the 1950s on what by then was a 30 hectare farm.

After such a long tenure, Richard and Wendy Farquhar decided to move to take up a larger farm.