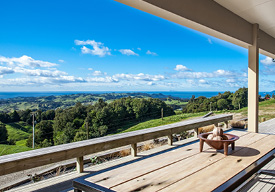 New Zealand’s so called ‘golden triangle’ is having a significant influence on the lifestyle property market.

Encompassing Auckland, Hamilton, and Tauranga, the triangle generates approximately 50 per cent of the country’s GDP, and contains a similar proportion of New Zealand’s population, which is forecast to grow by 35 per cent in the region in the next 25 years.

In terms of property and growth, the golden triangle accounts for close to 60 per cent of the building consents issued nationwide.

Camron Meade, PGG Wrightson Real Estate Waikato sales manager says the trend to move out of the big centres has played out more noticeably since mid-2020. “Lockdown spurred people and businesses to consider other locations to operate away from the office, with greater lifestyle options and cheaper running costs. They now know they can work remotely. It’s a change, and a liberation, that has pushed demand for lifestyle property,” says Camron.
Mark Needham of PGG Wrightson Real Estate, Pukekohe says plenty of people are taking the opportunity to leave the city.

“Franklin is a drawcard, though we also see Waiuku, anywhere across the north of Waikato, the Firth of Thames and Kaiaua attracting Aucklanders looking for a rural lifestyle. With the Southern Motorway, so long as you pick your time to travel, anywhere in easy proximity of Bombay Crossroad can be almost as close to Auckland as anyone who lives in the city itself.

“Investors and people returning from overseas are among the buyers. For around the value of an average Auckland residential property, you can buy a lifestyle property elsewhere. Franklin values are rising as people realise they can buy between two and 20 hectares for the same amount as an Auckland house on a small section,” he says.
Mark also sees the Covid influence.

“People are sick of the lockdowns. They want some freedom and fresh air. Among the benefits of Waikato is the sanity of having space around you.”

In August Mark sold a property to Auckland buyers sight unseen, 12 hours after it was listed, while Scott Borland of PGG Wrightson Real Estate, Cambridge has a similar story of purchasers highly motivated to leave Auckland.
“I took a three bedroom Pirongia lifestyle property to auction in late September: well located, with fruit trees, a chook house, raised vegetable gardens and a three bay shed. It sold 18 months ago for $850,000. We took 51 parties through the property, 12 attended the auction, and it sold for $1.38 million to an Auckland buyer who hadn’t even looked at the property, other than on video.

“That is 30 kilometres south of Hamilton, which suggests the ’golden triangle’ is expanding,” he says.
Martin Lee, also of PGG Wrightson Real Estate, Cambridge, sees similar intense demand.
“When we came out of the first lockdown last year, everyone expected the lifestyle market would drop 15 to 20 per cent. Instead it took off like a spaceship.

“Any lifestyle property we list in the $1.2 to $2.5 million range attracts large numbers of buyers, predominantly out of Auckland, or returning expats: although they can’t come back to New Zealand yet due to MIQ, they want to and they need to secure property, particularly with prices rising. Those people are having a marked effect on the market.
“At values up to approximately $6 million, another group of buyers, predominantly New Zealand-based, have substantial Auckland properties. They can use that to significant effect in markets outside Auckland. I have one potential buyer in that range who used to spend four months in Europe each year, who says he is now looking to secure a property that gives him the ability ‘To play in New Zealand,’” says Martin.

Slightly further from Auckland, Andrew Fowler of PGG Wrightson Real Estate, Tauranga also fields plenty of interest from buyers looking to move out of the city.

“Lifestyle property is in hot demand due to people seeking security, health and a good family environment. I’ve sold two lifestyle properties in the last year to purchasers from Waiheke, and several others to those from elsewhere in Auckland. Although they want to leave Auckland, they don’t want to go too far away and are keen to remain within an easy drive, with a good climate, which Bay of Plenty offers.

“We also sell plenty of lifestyle property to city folk wanting to move out of Tauranga, so the cycle goes on. From a selling point of view, for anyone with Bay of Plenty lifestyle property considering making their next move, now is the time to take advantage of the market, when demand is so strong, values so elevated and competition from others seeking to sell relatively light,” says Andrew.