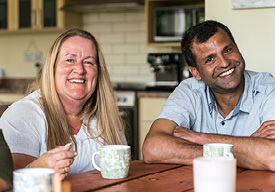 Sabir and Tracy prove that hard work pays off

When Sabir Ahmed arrived in New Zealand in 2007 he was 26 years old. From the north east of India, ‘in the shadow of the Chinese border, where there is practically nothing going on,’ Sabir brought one special gift to his new country: hard work.

“I came here wanting something better, and prepared to work my way up,” he explains.

Initially going to Paraparaumu with funds from his father to study for his commercial pilot’s licence, a few months later his father back in India died unexpectedly, and the money stopped. His dream of becoming a pilot was over, leaving him with just $20 in his pocket.

Left to look after himself, Sabir took whatever work he could, regularly working 70 hour weeks: in service stations, car rental forecourts, loading freight at Kapiti Airport, stacking supermarket shelves. At the supermarket Sabir had the great good fortune to meet Tracy, who was also working there.

“She already had five children. Now they call me ‘Dad.’ I’m proud of that.”

Tracy and Sabir make a good team, based on a shared outlook on life.

“When the relationship between you and your partner is good, anything can happen. We support each other. I’m lucky to have a wife and children who work together. We help each other towards whatever it might be. Little things can make a big difference. We agree that short term sacrifices are the way to achieve long term gains,” he says.

“In 2016 we bought a new house, in Otaki, and also bought our first brand new car. Then in 2020 we were able to buy a rental house in Levin.

“Back in India, everyone is used to bigger homes. Although I lived in a village, the houses and land were worth nothing compared to New Zealand. Otaki was good, though we still wanted something bigger,” he says.

In July this year they found it, or at least Tracy did.

Cher McCartney of PGG Wrightson Real Estate, Levin listed the property for sale, describing it as: “Warm, comfortable and thoroughly inviting, this lovely four bedroom home represents an enticing opportunity to establish yourself in an exclusive pocket of Ohau, where homes are tightly held and seldom offered to the market.”

Sabir didn’t even look at it.

“I was too busy, with no time to look at houses. I looked at the pictures. They looked nice, and Tracy said I’d like it. I signed the documents, and we bought the property,” he says.

Now, along with the rest of their family, the couple are enjoying their peaceful new neighbourhood.

“We are surrounded by paddocks and paddocks. Our neighbours either keep to themselves, or are really helpful. When we used to live in an urban area, all you hear is cars. Here you hear birds, cows, sheep. This is what we wanted: being close to nature,” he says.

Two of their sons now work for the business, though Sabir and Tracy have other plans for them.

“We want to set them free one day with their own business, let them start on their own,” says Sabir.

Cher is also pleased to have been part of such an uplifting story.

“It’s always a pleasure to be able to help such lovely people,” she says.