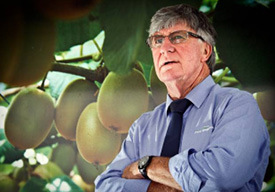 Kiwifruit orchards jump $100,000 per hectare in Bay of Plenty

Gold kiwifruit orchards are worth $100,000 more per hectare than last year with some earning 13 per cent returns.

''Spectacular'' is how PGG Wrightson rural and lifestyle sales consultant Stan Robb described the current marketplace, which has ''gone up another step''.

Robb said top gold kiwifruit orchards were fetching $1.2 to $1.3 million per hectare and last month he sold an orchard in Te Teko for more than $45m.

That orchard included 36ha of gold and 8ha of green kiwifruit, and strong orchard gate returns were continuing to drive up prices, Robb said.

''If you have a good gold orchard you can expect an orchard gate return of about $200,000 a hectare. Once you take out your growing costs you are still getting a 12 to 13 per cent return on your money, which is hard to beat.''

But Robb said it was a Catch-22 and, with everything looking good for the foreseeable future, there was a shortage of listings as demand outstripped supply.

''There is very little on the market and, because everything is looking great, people are holding on to their orchards.''

About 90 per cent of buyers were existing kiwifruit growers looking to expand, Robb said.

But production costs had increased strongly year on year and Johnson said this would impact grower returns.

''Growers need to be aware of growth challenges including labour, water and land as well as potential impacts from biosecurity.''

The organisation was focusing on attracting labour and ran its first labour attraction campaign after a 1200-person worker shortage in the Bay of Plenty in 2018.

That strategy, along with the Government's labour shortage declaration, good weather and longer shifts, meant at the peak of this season's harvest the worker shortage dropped to 900, Johnson said.

''We will soon launch our second year of the labour attraction campaign to encourage New Zealanders and backpackers to join the industry across New Zealand's kiwifruit regions.''

He said Zespri did not set the price for its gold kiwifruit licences, the growers did through a closed tender process.

''It remains our intent to continue with the release of 750ha annually until 2022, with the decision confirming the release for the following year to be made after each selling season.''