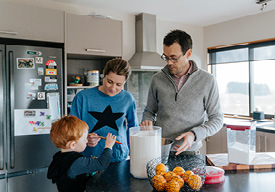 A well-kept secret among the local population, though maybe not for much longer, Mount Stewart, nine kilometres west of Feilding and 22 kilometres north west of Palmerston North is considered the dress circle of Manawatu.
Jacqui Campion of PGG Wrightson Real Estate, Feilding has sold several lifestyle properties in the area and can only see its appeal growing.

“It enjoys views to the ranges, including on clear days a distant glimpse of Mount Ruapahu, stunning sunsets, and the evening lights of Palmerston North. Many quality homes are being built along Mt Stewart Halcombe Road, which is the area’s main thoroughfare, running through picturesque farmland linking Halcombe to State Highway One, and special character Mt Biggs Primary School, just along the road, serves as a wonderful hub for the community,” she says.

Terry Batchelor and wife Gaye moved from Auckland to Mt Stewart five years ago. As Terry explains, the house Jacqui sold them was the main attraction.

“When we first arrived what first thing struck us was the lack of traffic, compared to Auckland where the traffic was, and still is, a nightmare for many as they struggle to commute to work each day.

“As for the house, a plantation style dwelling on seven hectares, we were thrilled, recognising such a property in Auckland would be well beyond our financial reach,” says Terry.

A more recent arrival, having lived in Johannesburg for the past 10 years, Manawatu born and bred Carl Bates moved to Mt Stewart in September with wife Candice and three-year-old son Angus.

“What we love about Mt Stewart is the ability to own a nice piece of land, enabling you to graze and rear stock, with plenty of space, and within easy reach of good amenities.

“While Candice works down the road in Bulls, I work from home much of the time, so manage to thoroughly enjoy the space and amazing views.

Both families rate the local community as the district’s greatest asset.

“They say ‘places are the people we meet,’ which is true in Mt Stewart. Although we are not farmers, having lived on lifestyle blocks in the past, when we arrived we brought pets from Auckland including Highland cattle, sheep, a dog, eight cats, and one goose. Our property lacked a loading ramp, so our neighbour generously offered his cattle ramp to unload our travel-weary animals, which was much appreciated.

“On the other side, another neighbour, when he occasionally does a little pest control, very considerably emails or texts those living nearby to forewarn them, so as to not scare them with the noise of his gun being discharged,” says Terry.

“We connected in and have been warmly welcomed very quickly. We bought some cattle from a neighbour, and Candice has started horse-riding, which is a great way to meet people. It’s a close knit community, where people will help in any way you might need,” he says.

Well established nearby towns Marton and Bulls have their own attractions, while the markets in Feilding and Sanson provide excellent and easy weekend excursions.

Terry sums it up: “I would recommend Mt Stewart to anybody seeking to live in an idyllic area; believe me you won’t be disappointed.”