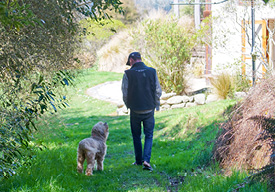 Grant South is well known in Peel Forest, where he is heavily involved in adventure tourism. In 1998 he began construction of a unique home in the South Canterbury village, something he had been thinking about for several years.

“Travelling the world I saw timbers and natural materials used in many buildings. Those places felt good, and different from the norm. We looked at log houses, mud brick and a few others, including a couple of straw bale houses in Wanaka. They seemed like the way to go, since we could do some of it ourselves,” he says.

After watching a log home go up in Peel Forest and meeting builder Graham Mould, Grant and his then wife Sue Harrison-South decided on the build, bringing Graham, known as ‘Mouldy,’ on board. Grant says he was great to work with.

“He loves timber and rustic ideas, and had some great contacts for different building materials.”

Those included 20 locally sourced power poles and another 60 hardwood poles from Ashburton; big old beams and loads of steel and bolts from the Waitaki Power project; a large beam from the old Lynn Creek Bridge; and recycled Matai for the upstairs floor.

“Things evolved: when Mouldy’s crane was here to lift the trusses in place, we also lifted some big boulders into the house before we put the walls and roof on. We had truckloads from Mount Peel Station, as well as enough riverbed rocks to create a stone floor through the living area.

“We built in stages, first the posts and beams, next the straw. Putting the bales in is difficult: the first lot goes on starter rebar rods, then each layer is pinned. Wire runs through pipe concreted into the foundation over the top bale and a top board, then strained down to push under the large perimeter beam, making the straw really solid.

“You use bales like building blocks. To change the size you feed string through on a big needle and re-tie them to length.

“Plastering is key. Since building, through two big earthquakes this place has hardly moved, and the plaster walls handled it really well,” he says.

Grant reckons the house has been great for the family.

“It’s like a big hut in the bush: the ceiling trusses look great; the straw bale system works well and it has stood the test of time,” he says.

Now Grant and partner Michelle have decided to sell, and downsize to a neighbouring cottage, bringing in Lyz Palmer of PGG Wrightson Real Estate, Timaru, to market the property, which Lyz describes as extraordinary.

“Its amazing lovingly hand-crafted construction gives the house so much character, nestled in the bush and matching the incredible views of Little Mt Peel and the Canterbury Plains.

“Three generous bedrooms plus a spacious nook that could become a fourth are spread out over two levels, along with two bathrooms, a separate toilet, an open office and a mezzanine space. An expansive open plan kitchen/dining/living room with impressively high ceilings takes up the third level.

“Two quaint studios hide in the garden and the kids will love the secret spaces and sneaky doors. If you’re looking for a better life, you might just find it here in Peel Forest,” says Lyz.