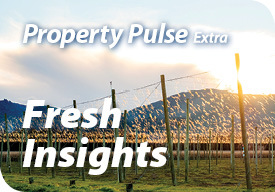 In 2013 350 hectares of hops were grown in New Zealand. By 2019 that had risen to 763 hectares, an increase of almost 120 per cent in six years, and the sector is set to grow still further, with plenty of demand for land suitable for hops.

Hops are a crucial component of beer, providing much of its flavour, and this rising demand is driven by the development of the craft beer market, both domestically and internationally.

Doug Donelan is chief executive of grower co-operative New Zealand Hops Limited. He says this country is well placed to make the most of what has become a fashion industry.

“New Zealand growers have a number of highly desirable varieties that are sought after in the international beer market, especially to brew craft beer. Local growers produce six different proprietorial hop varieties that can only be grown under license, plus another seven that were also developed in this country and are unique to New Zealand. Two additional new named cultivars are poised for release soon, with others pending within the next two to three seasons,” he says.

New Zealand growers produced 1,045,598 kilograms of hops this year, compared to 682,500 kilograms in 2013. However, the hop industry is not just about volume, as Doug explains.

“In 2010, after international market supply and demand imbalances over successive years created incremental seasonal surpluses, New Zealand Hops Limited adopted an industry growth strategy. We saw craft beer markets as an opportunity to increase New Zealand’s hop presence, especially in the northern hemisphere. Re-branding and repositioning our unique varieties was key to this strategy, in order to focus on a higher value proposition for growers and therefore improve farm gate returns.

“Consequently, a considerable shift has occurred, increasing what and how many varieties are grown for a spread of customers across different markets. Behind it all is a research programme and an ability to breed the unique varieties that the market wants,” he said.

Almost a decade later, Peter Evans of PGG Wrightson Real Estate, Nelson has seen the resulting expansion of the hop industry, which is centred in his region.

“Although hops are tenacious, fast-growing plants that are not susceptible to disease pressure in New Zealand, they have some specific needs, including total hours of daylight. As lengthening and shortening days are required for flowering and maturity, hops will only grow satisfactorily within a certain latitude. At 41 degrees south, our latitude in Nelson, coupled with plenty of sun hours, little wind and sufficiently cold winters, is perfect for growing hops.

“Hops were first grown by settlers from southern England and Germany as early as 1840. Our hop industry now is centred in Motueka, Riwaka, the Moutere, Waimea Plains and Tapawera,” he said.

Peter says the sector’s rapid growth is projected to continue for the next two to three years.

“Some Nelson grazing properties and dairy farms have been purchased recently for conversion to hop production. Corporate interest is also evident with some large developments under way. With sufficient scale, it becomes possible for growers to reach out directly to customers around the globe, rather than utilising the co-operative marketing structure that has traditionally underpinned New Zealand hop growers,” he said.

Hops are a hardy climbing perennial plant that in New Zealand will grow up to five metres per annum.

According to Doug Donelan, the cost of land aside, infrastructure to develop a viable hop unit is budgeted between $40,000 and $50,000 per hectare.

“Capital investment to develop a hop garden is considerable. Each grower requires their own significant processing and drying facility on site, so in addition to the cost of the cultivars themselves, a development budget will include the cost of pole and wire canopy structures to support the plants, irrigation infrastructure, plus picking machinery and kilns.

“Volume and throughput is essential to pay back that investment, which makes a minimum production area necessary for the scale to be viable. Most modelling for new development is based on a 35 hectare minimum, with some recent developments larger than that,” he said.

In addition to the improvements, land to grow hops needs to be flat, protected from wind, and have a sufficient water right of at least 30 millimetres per week. Although the soil types need to be suitable, several are. Additionally, late frosts can be an issue.

MyFarm head of sales Grant Payton has overseen the $20 million development. He says the company’s rationale for the development follows the same path as other quality New Zealand horticulture products.

“New Zealand is good at growing quality products, so our development is not doing anything new in that regard. Looking at the growth of the craft beer sector, in the United States alone there are currently 7000 craft brewers, which is projected to grow to 12,000. They are all looking for a point of difference. New Zealand hops provide that with an essential ingredient of beer that tastes and smells different to everything else.

“Because New Zealand grows only around one per cent of the world’s hop production, we could never manage to satisfy demand as the craft beer scene grows. We could substantially increase production from this country and still go nowhere near satisfying global demand for New Zealand hops.

“MyFarm, alongside our partner Hop Revolution, is taking a direct-to-brewer approach to selling our product. Access to certain varieties of hops ensures a strong point of difference in the market. Because of the scale of our Tapawera garden, we can build direct relationships with key brewers and commit to supply, which gives us greater certainty around returns,” he said.

Tapawera Hop Garden’s first harvest is scheduled for autumn 2020, with full production from 2021. MyFarm forecasts cash returns for its investors will start in 2021, rising to 15 per cent per annum in 2023. MyFarm’s plans for another hop development are well under way.

While Nelson’s conditions are ideal for hops, Doug Donelan says speculation around the viability of other districts for the crop is ongoing.

“There is always interest from certain quarters, though because hops are latitude sensitive, the closer you are to the equator, the less likely you will be to establish a commercial hop operation. Because it is such a large investment, establishing in a proven centre reduces risk. Since they have been grown in Nelson for over 160 years, it is no fluke that the industry is situated here and nowhere else.

“Auckland is traditionally the biggest market. If it was possible to grow them there, why wouldn’t you?” he said.

Some 85 per cent of local hops are exported.