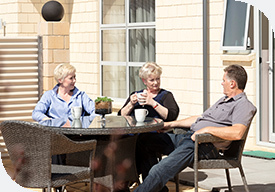 The Kents finally move on from quake trauma

Sharyn and David Kent bought their two storey, four-bedroom 1950s dream home in North New Brighton, on the east side of Christchurch, in 1988. They lived there happily, bringing up their two children, Nicholas and Rebecca, for the next 23 years. Then, over just a few moments one lunchtime in February 2011, like everyone else in the city, their lives were suddenly turned upside down.

In the Kents’ case, as soon as the dust settled after the 22 February 6.3 magnitude Christchurch earthquake, their house was red-stickered, unfit to live in or even enter. Sharyn says they did risk the aftershocks, though, racing in and out to collect as many of their possessions as possible before the red sticker was issued.

“We started with the important stuff, like photos, documents and anything to do with my business, then we went on to collect all our other items. We would always wait at the back door before we entered, listen (as in those early days you could hear it coming), then dive into the house and bring things out unpacked onto the back lawn. All the big furniture had to be left as it was too heavy for Dave and me, and it took another year for the insurance to arrange for the retrieval team to uplift the remaining still inside.”

Fortunately, they had recently bought a big caravan, which they moved into, parked on the driveway.

“Although it wasn’t ideal, we knew there were thousands of other people worse off than us, so we made the best of it. We set up a dehumidifier and heater, using an electric cord to buy power off our neighbour, since our house had been disconnected. With that, and because the caravan was well-insulated, we were very cosy,” Sharyn says.

Their daughter, Rebecca, was in a worse state, renting a home that Sharyn and David also owned in nearby Bexley, which was deemed in the red zone, where all properties were purchased by the government and more than 600 hectares of Christchurch suburbia was condemned to demolition.

“Rebecca had to move back in with us. David’s 92-year-old mum had lived with us for 10 years before the quakes. Because of the state Christchurch was in, and our driveway and footpaths were broken, plus her wee unit wasn’t level, we had to move her back to Balclutha, so Rebecca took over her granny flat,” says Sharyn.

After 12 months in the caravan, which was also doubling up as an office for Sharyn to run her business, their patience ran out and they had had enough.

“We were in the thick of it and became a bit frazzled. We had several incidents where our home had burglars attempting to break in, as well as another night, we were awoken by two guys trying to come in through the window of the caravan as we slept,” says Sharyn.

In February 2012, they managed to purchase a home in Kirwee, 32 kilometres west of the Christchurch CBD, reluctantly moving away from home base. Although that took them out of the worst of it, settlement of the insurance claim for the family home took another four years, finally coming through in October 2016. With their insurance money in the bank and the sale of their family home in an ‘as is, where is’ condition, at long last, the Kents could take the next step.

“David grew up on a farm, and it was a dream for both of us to come back to the rural life. We were ready to be out of the city, away from the earthquake damage in town. That said, we didn’t want to be too far from Christchurch as David’s work is at Harewood, and I need to be reasonably nearby for my business, which provides security for retailers.

“We put together a list of the criteria we wanted in a new house. It had to be a family home with minimal upkeep; we wanted some self-sufficiency, growing our own vegetables, privacy, running a few stock and starting to live from the land; and we needed to be able to put everything we owned in the shed, which as well as the caravan, also included a boat and a four wheel drive for each of them for when we are able to get away fishing.

With their wish list in hand and the sale of the Kirwee home needed, they contacted Min Cookson of PGG Wrightson Real Estate, Christchurch.

“We first met Min about 20 years ago. When we realised we wanted to stay in the area, we thought of Min as we often read of her success in real estate, plus we knew she lived in the area and was still farming herself. So Min Cookson it was, and we made a phone call to her asking: ‘Can you help us?’”

Although Min didn’t have anything that ticked all the boxes right then, along with her colleague Karen Hennessy, it didn’t take long before they listed a modern, permanent material home with a woodshed, a tunnelhouse, a self-contained studio and a fully enclosed three-bay shed on two hectares just outside Darfield, 50 kilometres west of the Christchurch CBD, and 38 kilometres from the outskirts of the city.

Although it was further away from the city than Sharyn and David had in mind, and they were reluctant at first, Min persuaded them to go out for a look.

“She came round and told us, ‘I have this property, you have to look at it.’ And when we did, we saw it ticked all the boxes. Even though it was further from Christchurch than we had been thinking, we knew it had everything we wanted. Once we saw the property, we decided, ‘This is it, we have found it.’

“We only ever looked at one property with Min and Karen, and this was it. After a few cups of coffee with Min, which we needed for her to understand what we really wanted, she got it right on when she introduced us to this property,” says Sharyn.

Before they left on that first viewing, the Kents gave Min all the details she needed to put the contract together. They signed it later in the day and are now happily settling in, Sharyn explains.

“We just love our new home."

“We are starting to make changes. Through the winter, we bought alpacas and lambs, and have planted cranberries, raspberries, blueberries, gooseberries and fruit trees to go with the many olive and feijoa trees already on the property. We bought a spa with a gazebo over it, and are just arranging things to suit us,” she says.

With Harewood on the west of the city, David’s commute takes roughly as long from Darfield as it did when they lived in North New Brighton, too.

“What we really love, is that we travel across the busy traffic and are not in traffic queues south or north of the city,” says Sharyn.

After what they have been through, it is a great relief to finally be able to move on.

“Living in Christchurch, the earthquakes are the biggest thing to happen in most of our lives. Now, at last, we are starting to feel settled again. After all the anxiety and uncertainty following losing our house and everything else that came with that, it is wonderful to be able to let all those negative feelings go. Being able to start moving on in our lives is a fantastic feeling,” says Sharyn.