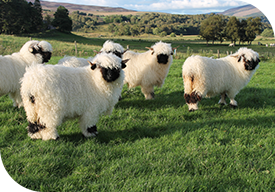 Sally Strathdee introduces Valais blacknose sheep and explains why this charming, super friendly breed is a welcome addition to any lifestyle property.

Attracted to the Valais blacknose sheep’s appealing look and easy going temperament, Sally Strathdee and Christine Reed are continuing to establish the breed in New Zealand, having realised how much Kiwis will enjoy adding these woolly friends to their families. Originally from Switzerland, embryos were first imported into New Zealand in 2017 from the United Kingdom.

At first glance Valais blacknose sheep are unique with long spiral horns complemented by distinctive black faces, ears and black patches on their knees, hocks and feet on an otherwise white coat.

The Valais are renowned as a great pet due to their lack of fear of people. The Swiss say “make friends with a Valais and you have a friend for life!” This is due to their gentle and friendly nature, attributes that mean the sheep are easy to handle and train. Valais are so trainable that they will generally come to you when you call their names.

Here’s some more interesting points about this new breed to New Zealand: