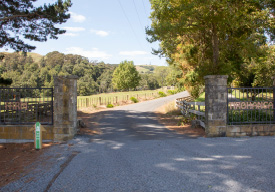 Jake and Margreet Chardon came to New Zealand from the Netherlands in 2000. Jake is a geneticist and the couple moved 18,000 kilometres, halfway around the world, when he was offered a position with LIC.

Jake and Margreet have transformed the property, 12 kilometres south of Cambridge, into their own private park, planting more than 25,000 trees on their 25 hectares. They also engaged architect Neil Keiser to build a house on an elevated section of the property, commanding views of six volcanoes.

Jake says on a clear day they can even sit on the deck and see Mount Taranaki, around 200 kilometres away.

“When you come from a flat country, like we do, you never tire of the views. Even after living here for 20 years, they are impossible to take for granted. We could watch the sun setting over all those beautiful volcanoes forever,” says Jake. Originally farmland and running stock, the Chardons have progressively retired the property, putting in at least 1000 native trees every year so that 16 hectares is now planted, alongside a small stand of eucalypts for firewood, and some remaining paddocks now leased to a neighbour.

According to Jake, when they arrived there were almost no birds, though that has changed immensely.

“Planting trees has helped create a new ecosystem where so many birds are thriving, especially tui and bellbirds, though we see almost every bird species here. To be able to plant trees then wait a few years for them to be populated with such thriving birdlife would be almost impossible in most countries,” he says.

Now the time has come for the Chardons to return to the Netherlands, to be closer to friends and family. They called Martin Lee back to sell the property again. He says under Jake and Margreet’s studious stewardship it has become a private park.

“A modern architecturally-designed homestead completed in 2009 and overlooking a native bush clad sanctuary, this property has the benefit of privacy, serenity, security, long views, and very low inputs. As well as the 25.9 hectare property, a 16.9 hectare adjoining block is also for sale, including a huge and superb elevated pre-prepared building site. Both blocks hold potential for passive income from carbon credits,” says Martin.

One unique aspect of their lifestyle that Jake and Margreet will particularly miss when they go back to the Netherlands is the tranquillity.

“It is absolutely quiet. When you are almost anywhere else in the world, you can hear traffic on the roads, or the neighbours, the hectic sounds of city life. We hear none of that. This is where you can come to rest and enjoy nature. All we hear is the birds. They wake us up every morning.”

After that, Jake admits coming to terms with a country that is smaller than the combined size of Waikato and King Country, only with 17 million people, will be difficult.