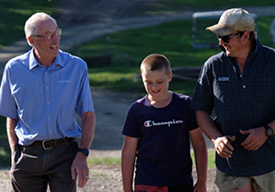 If farming and family go together, Tom and Sally Law provide an ideal example.

They are fully family focused, and have been since before they founded their business, Waimara Angus, in 1988 on a small Te Anau property. Their daughter Kate Pont explains.

“Mum and Dad began with eight cows. In the early days, they bought five more cows each year from Te Mania into the stud.

“All the way through they have been driven to build a business that can include the whole family. Now, along with my brother Andrew, sister Becky and each of our partners we all share in the business with our parents. We all now have children, ranging in age from 12 down to four years, so nine grandchildren in nine years. All are really into the business in different ways, especially at our annual bull sale, and we reckon at least half will end up as farmers,” says Kate.

PGG Wrightson has been alongside Sally and Tom since the beginning, initially via well-known South Otago based livestock agent Roger Keach, who was aligned with PGG Wrightson at the time, advising on stud stock purchases and sales.

From its origins, Waimara Angus gradually grew. In 2006 the stud moved to a new lease at Tumai, a 560 hectare coastal property in East Otago. Once again, PGG Wrightson was there, first via one of the company’s real estate salespeople Alan Turner, now retired, setting up the lease, then another livestock agent Mark Yeates, at the time Palmerston based, now Area Livestock Manager in Oamaru, overseeing it.

“Alan introduced us to the owner of Tumai, our Waikouaiti lease property. Initially it was a five year lease, which ultimately extended to 16 years. It turned out to be a really important opportunity. When my husband Chris and I came home to the lease property in 2010, we purchased a 50 hectare bull unit at Goodwood, also through Alan Turner,” says Kate.

By 2017 the Laws were able to purchase their own standalone block, farmed in conjunction with the lease: a 610 hectare property in Middlemarch on the Rock and Pillar range, growing the stud to almost 200 in-calf cows as well as heifers, and selling 25 to 30 beef bulls plus yearlings every year.

They used artificial insemination from the beginning, emphasising American bulls in the early 90s to a point where their herd comprised approximately 80 percent American genetics, before reverting back to New Zealand bloodlines, albeit incorporating overseas genetics with a proven New Zealand track record. 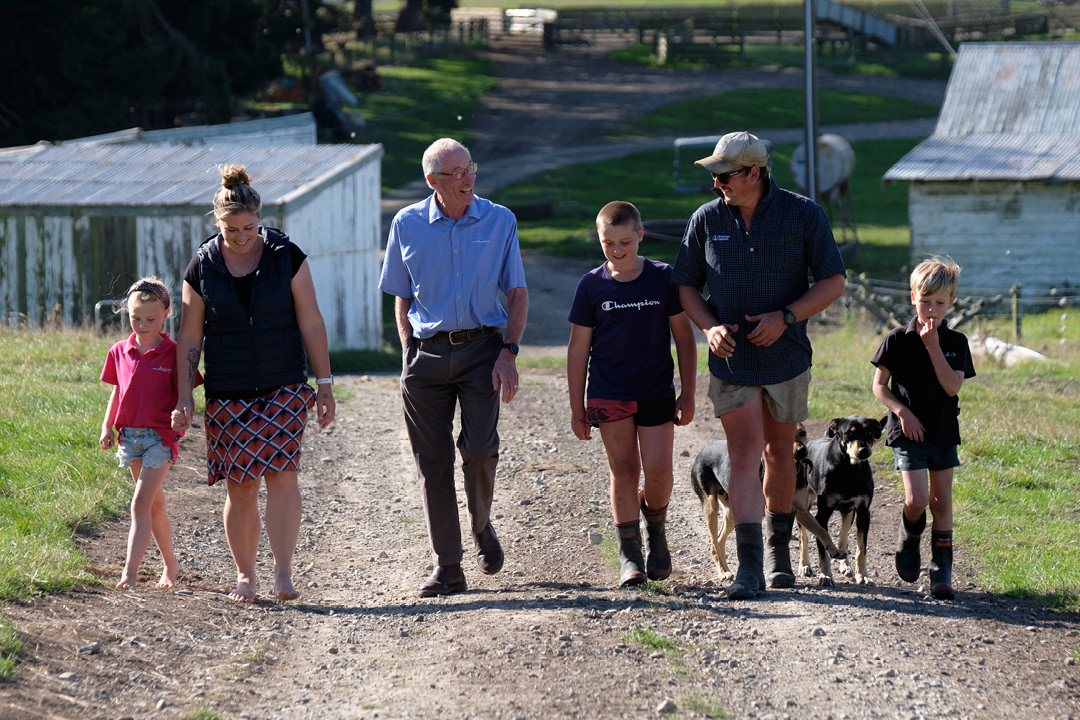 In the meantime, Kate and Chris were working for an Italian suit making company on an Otematata farm; brother Andrew and his wife Jayne were managing a property in Lumsden, where they are still based; while sister Becky and her husband Gene Runga were in Dunedin, Becky working as a mortgage broker and Gene as a builder.

“We needed to find a property with capacity for the business and the family. We looked at several in Otago, and were close with offers, though never quite managed it,” says Kate.

Looking nearer to Tom and Sally’s original home base, in Western Southland, though, they found an ideal option: an 823 hectare Eastern Bush farm on flat to easy contoured mostly cultivated paddock country, adjoining the Wairaki river and looking into the scenic Takitimu mountains, offered for sale by Andrew Patterson of PGG Wrightson Real Estate, Invercargill.

“It was just what we needed, particularly located around 40 minutes’ drive from Andrew and Jayne on their Lumsden property. And it was just over the Takitimu range from where Sally and Tom started the business,” says Kate.

However, while they were able to make an offer on the Eastern Bush farm, it was conditional on selling in Middlemarch.

“Andrew Patterson put us in contact with Roger Nicolson and Craig Bates of PGG Wrightson Real Estate, Otago to market the Middlemarch farm, and by working closely together, they were able to achieve what we needed. We were certainly motivated vendors: selling so we could finance the purchase of the new farm. At times it was stressful, and without the three of them working together as a team, it wouldn’t have been possible. Having them all part of the same company was essential, and between them they kept it on track, and made sure we could achieve our objective.

“After the earlier disappointments, missing out on other properties, I never thought we could pull it off. While it will be a few years before we build the business to the next level, the whole thing is evolving and we are now in a great position to further consolidate Waimara Angus, welcoming our clients to a new location at our next bull sale,” she says.

PGG Wrightson Livestock is also part of the picture, with Callum McDonald continuing to look after the Laws as genetics representative for Otago and Southland, while Palmerston based Gerard Shea will pass Waimara Angus over to Otautau based Willie Swale as their PGG Wrightson commercial livestock representative when they make the 300 kilometre move.