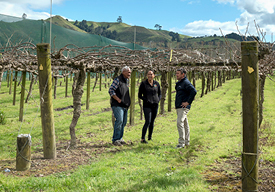 Kiwifruit orchards seldom change hands during the winter. However, in July one such transaction took place, finalising the sale of a property first offered to the market in February. This was an 18 hectare orchard five
kilometres north west of Te Puke, with a mix of green and gold blocks that sold in line with current benchmark values.

What was most remarkable about this sale was that, after 156 years, it reunited the land with its traditional owners, Te Kapu o Waitaha, the iwi whose land originally stretched from Tauranga to Te Puke.

Vivienne Robinson, General Manager of Te Kapu o Waitaha, says the purchase is a big milestone for the iwi, which had 117,000 hectares confiscated by the Crown in the 1860s following the New Zealand Wars.

“We were delighted to be able to take the opportunity for the iwi to gain back what was historically part of our tribal estate. This was a small part of what was taken from us. To be able to successfully compete for the land, and buy it back out of private ownership, has huge significance for Waitaha.

“This orchard sits in the shadow of one of the country’s largest heritage pā, sites, Papamoa Hills Regional Park, where around 7000 people, primarily Waitaha iwi, once lived within nine separate pā.

“While buying the property was commercially driven, the historical values of the land were even more important, and the decision of the Waitaha Group Holdings Ltd Partnership to purchase the orchard will help us achieve both commercial and cultural outcomes,” she says.

Iwi history documents that in the 19th century Waitaha occupied the land between Tauranga Harbour and the Waiari River, including the area inland up to the Kaimai Ranges, a link that the iwi traces back to the arrival of the Te Arawa waka, which brought Waitaha ancestor Hei to Aoteaoroa.

While some iwi members fought alongside the crown during the New Zealand Wars, and others remained neutral, one Waitaha leader, Hakaraia Mahika, was aligned with the Kīngitanga and fought against the British at Gate Pā, in April 1864, when the Crown suffered one of its most humiliating defeats.

As retribution, the Crown subsequently confiscated almost all of Waitaha’s tribal estate, pushing the iwi to the brink of
extinction. By the early 1900s the iwi was left with insufficient land and resources to sustain its people.

A Treaty of Waitangi settlement in 2011 provided some redress and this year’s purchase of the orchard is another positive step for Waitaha, as Vivienne explains.

“It has always been an iwi aspiration to purchase back some of our land. Although we have other land from the settlement, this investment brings us closer to home.

“Health and wellbeing is central to that and sustenance. Land gives sustenance to people.

“Alongside the orchard is the course of a stream, Te Kopuroa, which was once a pristine river that ran through the land providing a source of food for the iwi. With the orchard, we are now taking a commercial approach, driven by cultural values, where the fruit is taonga just as much as the land is. That puts a deeper meaning to service suppliers that step into that orchard: ‘You are managing a taonga on behalf of our people, please take care of it,’ she says.

Although Waitaha will keep the orchard producing kiwifruit, Vivienne says future social benefits go beyond providing employment and an economic response to the past.

“In addition to the tangible asset, purchase of the orchard also gives impetus to our ability to promote the ancient history of the land for future generations. We can now stand on it and talk about the history. We couldn’t do that before,” she says.

Dave McLaren of PGG Wrightson Real Estate, Te Puke listed the orchard for sale in February, little realising what its sale would mean. Vivienne says Waitaha was also initially unaware of how events would transpire.

“One of our board members saw the sale sign at the road front and came back ecstatic. We knew right away what buying the orchard would mean. We contacted Dave, though realised when he sent the tender documentation through there was little chance that we could complete the necessary due diligence before the tender
closing date. For an iwi based organisation like ours, the process takes much longer.

“Dave offered to speak with the vendor to see if it was possible to extend the tender process by an extra two weeks, which enabled us to do due diligence and consult with iwi members. That gave us the proper approval to submit a tender, though we weren’t able to disclose any information to our members until the transaction had gone  unconditional.

“Our board is sincerely grateful for the opportunity created by PGG Wrightson Real Estate and Dave to participate in the tender process. Through his skilful negotiation with the vendor, the tender closing date was extended by two weeks. We realise as an iwi that this is highly unusual. Through Dave’s understanding of our iwi view, knowing our strong cultural interest, and his commitment to achieve the best outcome, the extended closing afforded Waitaha the
chance to participate in the tender process, which eventually resulted in the successful purchase,” she says.

Those efforts were recognised at a blessing of the orchard, once the sale was complete, in July.

Te Kapu o Waitaha has a register of nearly 3000 beneficiaries. Its other investments include development land, commercial lease properties and several Te Puke schools, which are leased to the Ministry of Education. Purchasing the orchard is Waitaha’s first step into ownership of primary production land.

To read more of the Property Express magazine click here.